About the Cyberlaw Clinic Harvard Law School‘s Cyberlaw Clinic, based at Harvard’s Berkman Klein Center for Internet & Society, provides high-quality, pro-bono legal services to appropriate clients on issues relating to the Internet, technology, and intellectual property. Students enhance their preparation for high-tech practice and earn course credit by working on real-world litigation, client counseling, advocacy, and transactional / licensing projects and cases. The Clinic strives to help clients achieve success in their activities online, mindful of (and in response to) existing law. The Clinic also works with clients to shape the law’s development through policy and advocacy efforts. The Cyberlaw Clinic was the first of its kind, and it continues its tradition of innovation in its areas of practice. The Clinic works independently, with law students supervised by experienced and licensed attorneys.  In some cases, the Clinic collaborates with counsel throughout the country to take advantage of regional or substantive legal expertise. The Cyberlaw Clinic advocates with or on behalf of collaborators and clients on a variety of law and policy topics. The Clinic generally does not take positions in its own name. It makes client selection and other decisions relevant to its practice mindful of a set of core values and actively seeks to advance those values through its work. Values at the heart of the Clinic’s practice and teaching activities include: promotion of a robust and inclusive online ecosystem for free expression; advancement of diversity as a key interest in technology development and tech policy; elimination or mitigation of the impact of bias in the development and deployment of technology; respect for and protection of privacy, vis-à-vis both private and government actors; open government; transparency with respect to public and private technical systems that impact all citizens (and, in particular, members of vulnerable populations); access to knowledge and information; advancement of cultural production through efficient and balanced regulatory and enforcement regimes; and support for broad participation in public discourse

230-esque Language in the USMCA: What Does It Mean for the US and Canada? 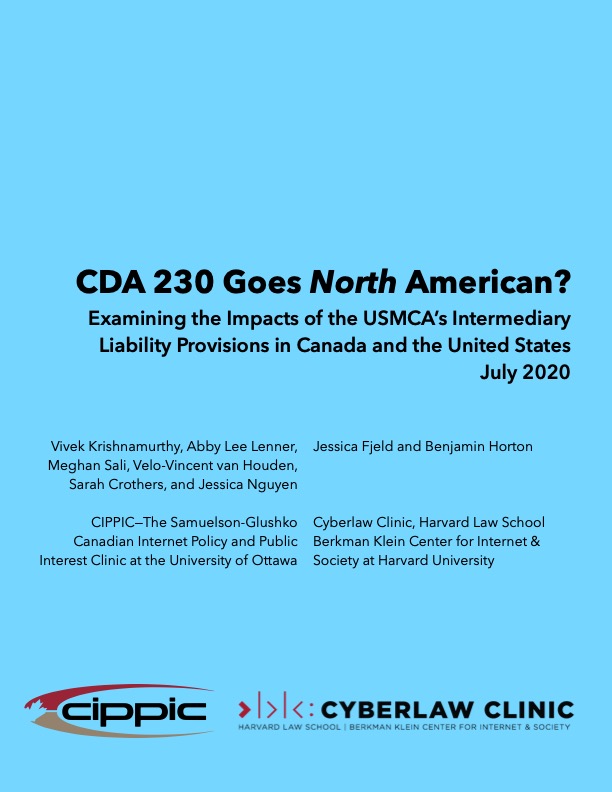 The Cyberlaw Clinic is excited to have collaborated with the Samuelson-Glushko Canadian Internet Policy and Public Interest Clinic (CIPPIC) to release a report today on the impact of the new United States-Mexico-Canada Agreement (USMCA) on intermediary liability laws in North America. The full report is available for download on SSRN. END_OF_DOCUMENT_TOKEN_TO_BE_REPLACED Papua New Guinea. Video Still. ©Stephan Bachenheimer/World Bank SB-PNG02[/caption] Last week, a court in Indonesia ruled that internet shutdowns which the government had imposed in Papua and West Papua in 2019 were illegal. The shutdowns were a part of the government’s strategy — which also included the use of excessive force — to suppress protests in August and September 2019 after an incident in which state security forces were filmed using racist language and attacking Papuan students. The shutdowns and accompanying mobile network disruptions prevented residents of the regions from exercising their freedom to assemble, keeping in touch with loved ones, and accessing important information relevant to their safety.  END_OF_DOCUMENT_TOKEN_TO_BE_REPLACED

COMMONWEALTH V. ESTABROOK | SJC–11833 | Mass SJC April 24, 2015 | The Cyberlaw Clinic filed an amicus brief (PDF) in the Supreme Judicial Court of Massachusetts on behalf of the American Civil Liberties Union of Massachusetts (ACLUM) and the Electronic Frontier Foundation (EFF) in Commonwealth v. Estabrook, SJC–11833. The case concerns location privacy and cell phone technology, specifically, whether law enforcement can gather a large amount of cell phone location information if it only plans to use a small part of it in a prosecution. Amici argue that the SJC’s previous decision in Augustine requires police to get a warrant to obtain vast amounts of location information even if they only plan to use a small amount. The brief urges the SJC to establish a blanket warrant requirement for whenever police seek cellphone location data. As the brief notes, considering the growing volume and accuracy of such data, and the confusion that an exception in Augustine has created in the lower courts, a blanket warrant requirement would provide much-needed clarity to police, prosecutors, and the public. Such a rule would align Massachusetts with the dozen other states that have imposed blanket warrant requirements for cellphone location data, without any apparent ill effects on the ability of the police to investigate crimes.

Protected by Akismet • Blog with WordPress